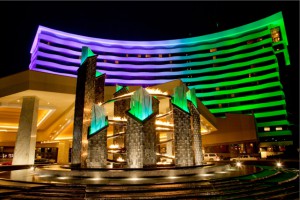 Choctaw Casino Resort and Hard Rock Cafe Tampa both received the coveted prize during a glamorous, “Ocean’s 11” themed evening at Our Lady of Los Angeles Cathedral.

Visual Terrain’s long list of vendor, rep and manufacturer acknowledgements drew comments and some appreciative thanks. “It’s truly a case of, ‘It takes a village’ to complete one of these projects,” said Visual Terrain CEO Lisa Passamonte Green.

Both projects went on to receive Awards of Merit at the national level from the IESNA.

“I salute our team for their hard work and amazing creativity in bringing these projects to life!” said Passamonte Green.